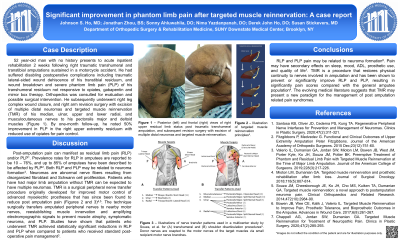 Case Description: The patient presented to acute inpatient rehabilitation 2 weeks following right traumatic transhumeral and transtibial amputations sustained in a motorcycle accident. He had suffered disabling postoperative complications including traumatic lateral-sided wound dehiscence of his transtibial residuum, and wound breakdown and severe PLP of his transhumeral residuum not responsive to opiates, gabapentin and mirror box therapy. Orthopedics was consulted for evaluation and possible surgical intervention. He subsequently underwent right leg complex wound closure, and right arm revision surgery with excision of multiple distal neuromas and targeted muscle reinnervation (TMR). By one-month follow-up, he noted 50% improvement in PLP in the right upper extremity residuum with reduced use of opiates for pain control.

Discussions: Post-amputation pain can manifest as residual limb pain (RLP) and/or PLP. Prevalence rates for RLP in amputees are reported to be 10 – 76%, and up to 85% of amputees have been described to be affected by PLP. Both RLP and PLP may be related to neuroma formation. Neuromas are abnormal nerve fibers resulting from disorganized fibroblast and Schwann cell proliferation. Patients who have had major limb amputation without TMR can be expected to have multiple neuromas. TMR is a surgical peripheral nerve transfer procedure originally developed for improved motor control of advanced myoelectric prostheses that has since been found to reduce post amputation pain. Studies have shown that patients who underwent TMR achieved statistically significant reductions in RLP and PLP when compared to patients who received standard post-operative pain management.

Conclusions: RLP and PLP pain may be related to neuroma formation. Pain may have secondary effects on sleep, mood, ADL, prosthetic use, and quality of life. The evolving medical literature suggests that TMR may present a new paradigm for the management of post amputation related pain syndromes.