Smoke up the Chimney: Osseous Infarcts in a Patient with Knee Pain: A Case Report. 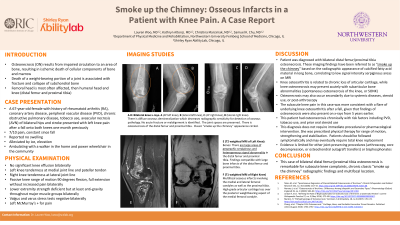 Knee MRIs revealed large areas of serpiginous, heterogeneous signal abnormality in the distal femur and proximal tibia, and moderate chondral wear over the left medial tibial plateau and lateral patellar facet. There were no acute injuries.

Discussions: Imaging was consistent with osteoarthritis and large bone infarcts in the distal femur and proximal tibia. Similar infarcts were noted on x-rays 5 years prior. These findings have been referred to as having a “smoke up the chimney” appearance. While knee osteoarthritis is related to chronic loss of articular cartilage, knee osteonecrosis may present acutely with subarticular bone abnormalities. Osteonecrosis may also occur post-arthroscopy and secondarily due to systemic diseases. This patient had osteonecrosis chronically with risk factors including PVD, tobacco use, and prior steroid administration. This diagnosis does not require immediate intervention. Patients should be followed symptomatically and may eventually require total knee replacement.