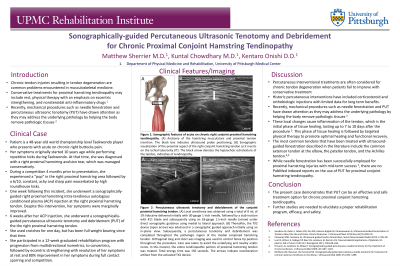 Case Description: Patient is a 48-year-old world championship level Taekwondo player who presents with acute on chronic right buttocks pain. Ten years ago, she was diagnosed with a right proximal hamstring avulsion tear, which was managed conservatively. Four months prior to presentation, she experienced a “pop” in the right proximal hamstring area during a competition followed by a severe, sharp, constant pain exacerbated by high roundhouse kicks. One week later, she underwent a sonographically-guided right proximal hamstring intra-tendinous autologous conditioned plasma injection at the right proximal hamstring tendon. Despite this intervention, her symptoms were marginally improved. With the world championships approaching in 6 months, she underwent a sonographically-guided percutaneous ultrasonic tenotomy and debridement (PUT) 6 weeks after her injection. She participated in a 12-week graduated rehabilitation program with progression from multidirectional isometrics to concentrics to eccentric strengthening with resolution of her symptoms at rest and 80% improvement in her symptoms during competition.

Discussions: Chronic tendon injuries resulting in tendon degeneration are common problems encountered in musculoskeletal medicine. Conservative treatments for proximal hamstring tendinopathy may include rest, physical therapy focused on eccentric strengthening, and nonsteroidal anti-inflammatory drugs. Percutaneous interventional treatments are often considered, which included corticosteroid injections and other orthobiologic injections with limited data for long term benefits. Recently, mechanical procedures such as needle fenestration and PUT have drawn attention as they may address the underlying pathology by helping the body remove pathologic tissues. While needle fenestration has been successfully employed for proximal hamstring injuries with mid-term success, there was no published reports on the use of PUT for proximal conjoint hamstring tendinopathy.