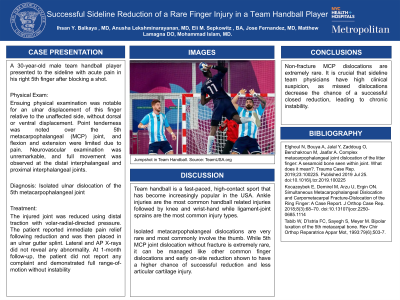 Case Description: A 30-year-old male team handball player presented to the sideline with acute pain in his right 5th finger after blocking a shot. Ensuing physical examination was notable for an ulnar displacement of this finger relative to the unaffected side, without dorsal or ventral displacement. Point tenderness was noted over the 5th metacarpophalangeal (MCP) joint, and flexion and extension were limited due to pain. Neurovascular examination was unremarkable, and full movement was observed at the distal interphalangeal and proximal interphalangeal joints. The injured joint was reduced using distal traction with volar-radial-directed pressure. The patient reported immediate pain relief following reduction and was then placed in an ulnar gutter splint. Lateral and AP X-rays did not reveal any abnormality. At 1-month follow-up, the patient did not report any complaint and demonstrated full range-of-motion without instability.

Discussions: Team handball is a fast-paced, high-contact sport that has become increasingly popular in the USA. Ankle injuries are the most common handball related injuries followed by knee and wrist-hand while ligament-joint sprains are the most common injury types. Isolated metacarpophalangeal dislocations are very rare and most commonly involve the thumb. While 5th MCP joint dislocation without fracture is extremely rare, it can be managed like other common finger dislocations and early on-site reduction has been shown to have a higher chance of successful reduction and less articular cartilage injury.

Conclusions: Non-fracture MCP dislocations are extremely rare. It is crucial that sideline team physicians have high clinical suspicion, as missed dislocations decrease the chance of a successful closed reduction, leading to chronic instability