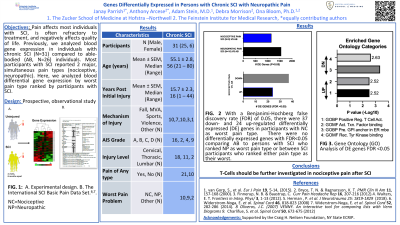 Conclusions: This study suggests that T-cells should be further investigated in nociceptive pain after SCI. The finding that there were no differentially expressed genes with an FDR< 0.05 between SCI participants with nociceptive vs. neuropathic pain as their worst pain type likely reflects the small sample size and the clinical reality that participants, as is common in SCI, experienced multiple pain types simultaneously, complicating differential expression analysis.