Comparison of Scapular Dyskinesis presentations in athletes of different sports: A Meta-analysis 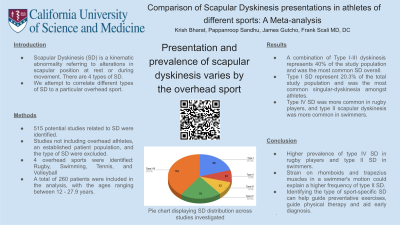 Objectives: Scapular Dyskinesis (SD) is a kinematic abnormality referring to alterations in scapular position at rest or during movement of the arm. Previous studies have established that athletes participating in overhead sports such as swimming and rugby have a higher tendency of experiencing SD. Based on the position of the scapular abnormality, SD is divided into 4 different types (I-IV). We attempt to correlate different types of SD to a particular overhead sport.

Design: This was a meta-analysis. 515 potential studies related to SD were identified. Studies not including overhead athletes, an established patient population, and the type of SD were excluded leaving 4 studies. Studies involving rugby, tennis, swimming, and volleyball were included. A total of 260 patients were included in the analysis, with the ages ranging between 12 - 27.9 years.

Conclusions: Scapular Dyskinesis is an asymptomatic condition found in mostly overhead athletes. Type I SD is the most common type. There is a higher prevalence of type IV SD in rugby players and type II SD in swimmers. The extensive strain on rhomboids and trapezius muscles in a swimmer's motion could explain a higher frequency of type II SD, possibly secondary to decreased scapular protraction. Further studies would be beneficial in illustrating the mechanics behind the sport-specific variation of SD. Moreover, identifying the type of sport-specific SD can help guide preventative exercises, guide physical therapy and aid early diagnosis.