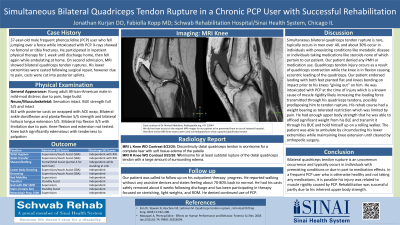 Case Description: Our patient is a 37-year-old male frequent phencyclidine (PCP) user who fell jumping over a fence while intoxicated with PCP. Initial x-rays showed no femoral or tibia fractures. He participated in inpatient physical therapy for one week until his discharge home, then fell again while ambulating. On second presentation, MRI confirmed bilateral quadriceps tendon ruptures. His lower extremities were casted following surgical repair, however due to pain, casts were cut into posterior splints. He participated in therapy focused on ADLs and ambulation with a walker, struggling to maintain knee extension. The patient had sufficient upper body strength, as he was a warehouse worker performing heavy lifting, that he was able to support himself on a rolling walker and used circumduction of lower extremities to maintain knee extension.

Discussions: Simultaneous bilateral quadriceps tendon rupture is rare, typically occurs in men over 40, and about 30% occur in individuals with preexisting conditions like metabolic disease or individuals taking medications like steroids neither of which pertain to our patient. Quadriceps tendon injury occurs as a result of quadriceps contraction while the knee is in flexion causing eccentric loading of the quadriceps. Our patient stated he landed with both feet planted prior to both knees giving out on him. He was intoxicated with PCP at the time of injury which is a known cause of muscle rigidity likely increasing the force transmitted through his quadriceps tendons, possibly predisposing him to tendon rupture. He was able to complete inpatient rehabilitation due to his inherent upper body strength allowing for increased support during ambulation with a walker.

Conclusions: Use of PCP may increase chances of, already rare, quadriceps tendon rupture from increased eccentric loading on the tendons. Rehabilitation was successful due to sufficient upper body strength to maintain knee extension, allowing healing of tendons.