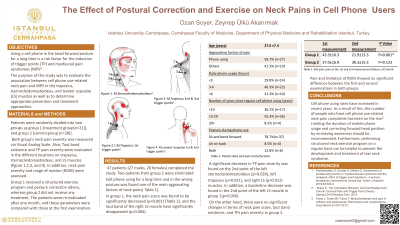 Objectives: Using a cell phone in the head forward posture for a long time is a risk factor for the induction of trigger points (TP) and myofascial pain syndromes (MPS). The purpose of this study was to evaluate the association between cell phone use-related neck pain and MPS in the trapezius, sternocleidomastoideus, and levator scapulae (LS) muscles as well as to determine appropriate prevention and treatment approaches.

Design: In total, 49 patients who had neck pain and reported using a cell phone were included and they divided randomly into two groups. Taut band existence and TP pain severity were evaluated in the trapezius, sternocleidomastoideus, and LS muscles. Also, neck pain severity and range of motion (ROM) were assessed. Group 1 received an exercise programme and posture correction advice, whereas group 2 didn’t receive any treatment. The patients were re-evaluated after 1 month, and these parameters were compared with those at the first examination.

Results: In group 1, the neck pain score was found to be significantly decreased (p < 0.001), and the taut band of the right LS muscle to have significantly disappeared (p=0.004). A significant decrease in TP pain severity was found on the 2nd point of the left sternocleidomastoideus (p=0.039), left trapezius (p=0.031), and right LS (p=0.012) muscles. In addition, a borderline decrease was found in the 2nd point of the left LS muscle in group 1(p=0.056).  On the other hand, there were no significant changes in terms of neck pain score, taut band existence, and TPs pain severity in group 2. Pain and limitation of ROM showed no significant difference between the first and second examinations in both groups.

Conclusions: Limiting the duration of mobile phone usage, performing exercises and correcting the head forward position by increasing awareness can be helpful in preventing and treatment of text neck syndrome.

Research Study with Best Paper Award Abstract: Objectives
Neck pain is a major musculoskeletal complaint in the young population. Myofascial pain syndromes (MPS) were defined as one of the leading causes of neck and thoracic pain. MPS are characterized by trigger points (TP), taut bands, pressure sensitivity, and referred pain.
Using a cell phone in abnormal posture for a long time puts increased strain on neck muscles and causes the induction of TPs and MPS. Consequently, long-term fatigue, acute and chronic pain of the musculoskeletal system, and postural changes are detected in patients. If this condition is left untreated, it may be responsible for permanent changes such as flattening of the cervical spinal curve, spinal misalignment, and early spinal degenerations.
Along with steadily increasing their usage, cell phones are becoming more and more important in our lives. As a result of that “text neck” which is the term for cervical spinal degeneration resulting from frequent forward head flexion while looking down at the of mobile devices, is becoming more common.
In this study, we aimed to increase awareness among the population and prevent text neck syndrome. Another goal of this study was to evaluate the association between cell phone use related-neck pain and MPS in trapezius, sternocleidomastoideus, and Levator Scapulae (LS) muscles as well as determining an appropriate treatment approach by providing a structured exercise program and posture correction advice.

Approval was obtained from the ethics committee. A total of 49 patients (21 female and 28 male) who were cell phone users and complained of neck pain attended this research. Occupations of the patients included desk workers and students.
Our inclusion criteria were: neck pain complaint, using a cell phone for at least two hours per day for five years, and being between 15 and 40 years old. Whereas patients that had previous neck-head trauma, history of surgical intervention in the neck area, neurological deficit, severe neck pain which required medical treatment, cervical disc disease with radiculopathy, inflammatory or malignant type of pain, and systematic diseases were excluded. Patients that suitable to participate study were randomly divided into two groups as group 1 [treatment group (n=21)], and group 2 [control group (n=28)].
The examination consisted of four parts, including medical history, inspection, palpation, and neck range of motion (ROM) examination. Patients’ history was asked in detail and age, body mass index (BMI), occupation, daily usage of cell phone and computer, number of years since regular cell phone using start, duration of pain, pain characteristic and reference pattern, aggravating and alleviating factors, position during cell phone use, sport activity and smoking history were recorded. Neck pain severity was measured by the Visual Analog scale (VAS) and saved as millimeters.
During the inspection, patients were evaluated for shoulder asymmetry, cervical lordosis, and dorsal postural deformities.
In the palpation part, two different points of sternocleidomastoideus, three different points of trapezius and two different points of LS were palpated and evaluated in terms of taut muscle bands and TP existence. While pression of these points, patients were asked to classify TP pain severity as grade 1 (mild pain), grade 2 (moderate pain) or grade 3 (severe pain).During the neck ROM examination patients were assessed for pain and limitation in neck movements.
Patients in group 2 were instructed to continue their regular life and not to receive any additional medication or treatment. On the other hand, patients in group 1 received a structured, exercise program consisting of neck muscles stretching and posture exercises also they were informed to perform exercises as 10 repeats and 2 sets in every day. In addition to exercises, they received advice for posture correction and limitations during cell phone usage.One month after the first examination, patients were called for control. In the follow-up examination, patients’ neck pain severity, taut bands, TPs pain severity, and neck ROM were assessed again.

Results
From a total of 49 patients, 21 patients in group 1 and 26 patients in group 2 completed the study. Two patients from group 2 were eliminated. 46.3% of patients reported that their daily phone usage was between 3 to 6 hours and 58.7% of patients stated that cell phone use caused or increased their neck pain.
In the physical examination, cervical lordosis was found to be decreased in 55.3% of patients. Neck pain score in group 1 was 43.3±16.3 (mean ± SD) in the first assessment, while it was 21.9±13.3 (mean ± SD) in the second assessment. According to VAS neck pain score results, a significant decrease was found in group 1 (p < 0.001). In contrast, there were no significant changes found in group 2 (p=0.123). Group 2 neck pain severity scores were recorded as 37.0±16.9 (mean ± SD) in the first and 30.3±15.3 (mean ± SD) in the second assessment.
Patients were evaluated in terms of the existence of the taut band and TP pain severity during palpation. In group 1, only the taut band of right LS had significantly disappeared (p=0.004); however, there were no significant changes in group 2 with regard to examined muscles.
TPs pain severity was found to be significantly decreased at the 2nd point of the left sternocleidomastoideus (p=0.039), left trapezius (p=0.031), and right LS (p=0.012) muscles in group 1. In the 2nd point of the left side in LS, pain decrease was found borderline, although it did not reach statistical significance. There were no significant changes with regard to TP pain severity in group 2. Pain and limitation during neck ROM examination revealed no significant changes between the first and second examinations in group 1 and 2.
Conclusion
Cell phone using rates have increased in recent years. As a result of this, the number of people who have cell phone use-related neck pain complaints has been on the rise. Limiting the duration of mobile phone usage and correcting forward head position by increasing awareness should be recommended. Furthermore, performing a structured neck exercise program  on a regular basis can be helpful to prevent the development and treatment of text neck syndrome.