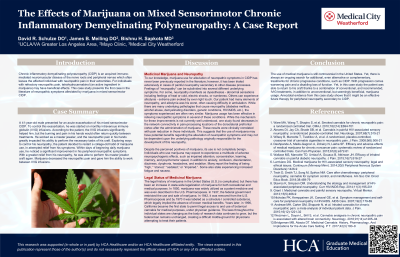 Case Description: A 41-year-old male presented for an acute exacerbation of his mixed sensorimotor CIDP. To control this exacerbation, he was started on monthly intravenous immune globulin (IVIG) infusions. According to the patient, the IVIG infusions significantly helped him, but the burning and pain in his hands would often return quickly between treatments. He worked as a master jeweler, and the neuropathic pain in his hands greatly impacted his ability to perform the necessary tasks of his craft. Exploring ways to control his neuropathy, the patient decided to restart a college-old habit of marijuana use, in attempted relief from his symptoms. Within days of beginning daily marijuana use, he noticed a significant improvement in his peripheral neuropathic symptoms. With a greater relief from his neuropathy, he was able to perform his master jeweler craft again. Marijuana decreased the neuropathic pain and gave him the ability to work between IVIG infusions.

Discussions: Chronic inflammatory demyelinating polyneuropathy is an acquired immune-mediated neuromuscular disease of the nerve roots and peripheral nerves which often leaves the affected individual with neuropathic pain in their extremities. For individuals with refractory neuropathic pain that failed conventional pharmacologic treatment, studies have shown that marijuana may have beneficial effects, particularly in patients with HIV-associated, chemotherapy-induced, or diabetically-stimulated neuropathy.

Conclusions: The use of medical marijuana is still controversial in the United States. Yet, there is always an ongoing search for additional, even alternative or complementary, treatments for chronic progressive conditions, such as CIDP. In this case study, the patient was able to return to his craft thanks to a combination of conventional, and recommended, IVIG treatments, in addition to unconventional, but seemingly beneficial, marijuana usage. Anecdotal evidence from this case study shows that it might be an effective future therapy for peripheral neuropathy secondary to CIDP.