Assessing Functional and Cognitive Decline in Patients with Metastatic Disease: A Case Study 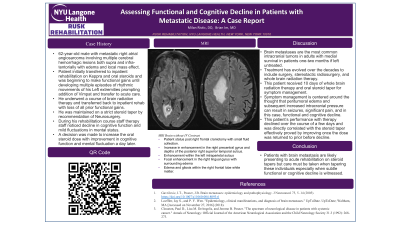 Case Description: 62 year-old male with metastatic right atrial angiosarcoma involving multiple cerebral hemorrhagic lesions both supra and infra-tentorially with edema and local mass effect. Patient initially transferred to inpatient rehabilitation on Keppra and oral steroids and was beginning to make functional gains until developing multiple episodes of rhythmic movements of his Left extremities prompting addition of Vimpat and transfer to acute care. He underwent a course of brain radiation therapy and transferred back to inpatient rehab with loss of all prior functional gains. He was maintained on a strict steroid taper by recommendation of Neurosurgery. During his rehabilitation course staff therapy staff noticed decline in cognitive function and mild fluctuations in mental status. A decision was made to increase the oral steroid dose with improvement in cognitive function and mental fluctuation a day later.

Discussions: Brain metastases are the most common intracranial tumors in adults with medial survival in patients one-two months if left untreated. Treatment has evolved over the decades to include surgery, stereotactic radiosurgery, and whole brain radiation therapy. This particular patient received 10 days of whole brain radiation therapy and oral steroid taper for symptom management. Symptom management is centered around the thought that peritumoral edema and subsequent increased intracranial pressure can result in seizures, significant pain, and in this case, functional and cognitive decline. This patient’s performance with therapy declined over the course of a few days and was directly correlated with the steroid taper effectively proved by improving once the dose was returned to prior before decline.

Conclusions: Patients with brain metastasis are likely presenting to acute rehabilitation on steroid tapers but care must be taken when tapering these individuals especially when subtle functional or cognitive decline is witnessed.