The Importance of Early Diagnosis in Parsonage-Turner Syndrome 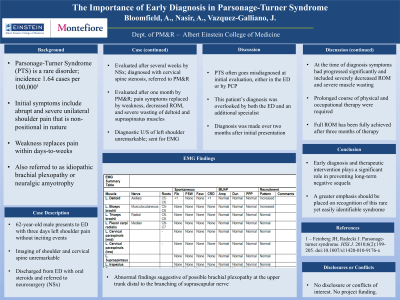 Case Description: A 62-year-old male presents to the ED with complaints of three days progressive left shoulder pain without inciting event or systemic findings. X-ray imaging reveals no intracranial or cervical spine pathology. Patient is discharged from the ED with Medrol dose pack and referred to neurosurgery. One week later he is evaluated by neurosurgery, diagnosed with cervical spinal stenosis and referred to physiatry for further evaluation. At nearest physiatry appointment one month later the shoulder pain resolved, however muscle weakness, decreased active range of motion, and severe wasting of the deltoid and supraspinatus muscles were present. A diagnostic ultrasound of the left shoulder was unremarkable. Electrodiagnostic study showed a brachial plexopathy involving the left upper trunk.

Discussions: Parsonage-Turner syndrome (PTS) is a rare disorder with a reported incidence of 1.64 cases per 100,000 people, in which the patient suddenly develops constant, severe unilateral shoulder pain that is not positional in nature. Although not present initially, weakness replaces the symptomatic pain a few days to weeks after the initial onset of symptoms. The pathophysiologic events which result in PTS have, as yet, not been fully described.

Conclusions: Due to its unclear etiology and sudden symptomatic onset, PTS often goes misdiagnosed at initial evaluation, either in primary care or emergency settings. In this particular case the diagnosis was overlooked in the emergency department and an additional specialty service. At the time of evaluation by physiatry, over two months after initial presentation to ED for shoulder pain, significantly advanced symptoms were present. Although self-limiting, early therapeutic intervention plays a significant role in preventing negative sequela of PTS such as muscle wasting, decreased strength, decreased range of motion, and time spent in physical therapy. As such, a greater emphasis should be placed on recognition and early diagnosis of this uncommon, yet easily identifiable, syndrome.