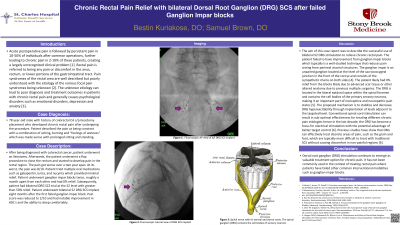 Case Diagnosis: 78 year-old male with history of colorectal CA s/p ileostomy placement who developed chronic rectal pain. Described the pain as being constant with a combination of aching, burning and "feelings of wetness” which was made worse with prolonged sitting and standing

Case Description: Patient underwent a flap procedure to close the rectum and started to develop pain which got worse over a two year span. At its worst, the pain was 8/10. Patient tried multiple oral agents such as gabapentin, lyrica, and nucynta which provided minimal relief. Patient underwent ganglion impar blocks twice, roughly a month apart from each other and had 0% relief. Subsequently, patient had bilateral DRG SCS trial at the S2 level with greater than 50% relief. Patient underwent bilateral S2 DRG SCS implant eight months after the first failed ganglion impar block. Pain score was reduced to 2/10 and had notable improvement in ADL’s and the ability to sleep comfortably.

Discussions: The aim of this case report was to describe the successful use of B/L S2 DRG stimulation after failing to have improvement from ganglion impar blocks which are a form of sympathetic blocks that are commonly used to treat perineal/anal pain. This patient likely had 0% relief from the blocks likely due to advanced scar tissue or other altered anatomy due to previous multiple surgeries. The DRG contains cell bodies of primary sensory neurons making it an important part of nociceptive and neuropathic pain states. The proposed mechanism is to stabilize and decrease DRG hyperexcitability through implantation of leads adjacent to the targeted level.

Conclusions: Dorsal root ganglion (DRG) stimulation continues to emerge as valuable treatment option for chronic pain. It has not been commonly used in the context of treating rectal pain where patients have failed other common interventional modalities such as ganglion impar blocks.