Tongue ring entrapment within the appendix of a patient with aphasia secondary to stroke in the acute rehabilitation setting. 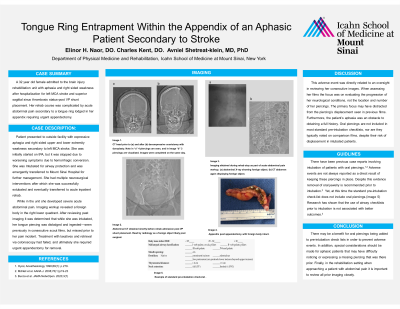 Case Description: During previous hospitalization the patient required emergent intubation for airway protection before undergoing multiple neurosurgical interventions; after which she was successfully extubated. While in the rehab unit she developed severe acute abdominal pain. Imaging workup revealed a foreign body in the right lower quadrant. After reviewing past imaging it was determined that while she was intubated, her tongue piercing was dislodged and ingested—seen previously in consecutive scout films, but missed prior to her pain incident. Treatment with laxatives and retrieval via colonoscopy had failed, and ultimately she required urgent appendectomy for removal.

Discussions: This adverse event was directly related to an oversight in reviewing her consecutive images. When assessing her films the focus was on evaluating the progression of her neurological conditions, not the location and number of her piercings. The primary focus may have distracted from the piercing’s displacement seen in previous films. Furthermore, the patient’s aphasia was an obstacle to obtaining a full history. Oral piercings are not included in most standard pre-intubation checklists, nor are they typically noted on comparison films, despite their risk of displacement in intubated patients.

Conclusions: There may be a benefit for oral piercings being added to pre-intubation check lists in order to prevent adverse events. In addition, special considerations should be made for aphasic patients that may have difficulty noticing or expressing a missing piercing that was there prior. Finally, in the rehabilitation setting when approaching a patient with abdominal pain it is important to review all prior imaging closely.