Type IIa Bertolotti’s Syndrome as a Source of New Onset Lower Back Pain: A Case Report 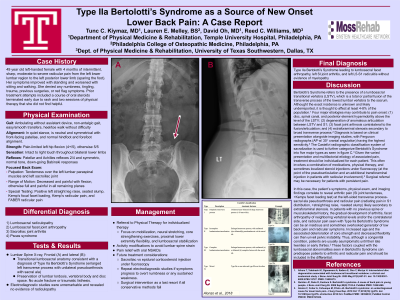 Case Description: Non-steroidal anti-inflammatories and physical therapy targeting core strengthening, pelvic stability, and hip flexor flexibility were prescribed. At 8-week follow-up, the patient had discontinued physical therapy after one session due to severe pain and noted ongoing symptoms, in addition to acute onset of new, near-constant numbness in the lateral aspect of her left leg for 3 weeks. Repeat electrodiagnostic studies were scheduled and potential steroid injection under fluoroscopy of her L6-sacrum pseudoarthrosis was discussed.

Discussions: In a patient with no previous spine or musculoskeletal history, the gradual development of arthritis of the pseudoarthrosis seen with Type IIa Bertolotti’s Syndrome can be an insidious and often overlooked generator of low back pain and radicular symptoms.

Conclusions: Although more commonly asymptomatic and usually congenital, Bertolotti’s Syndrome can be a source of significant pain and morbidity for patients. Increased age and the associated deterioration of core strength can unveil pelvic instability. These factors coupled with the lumbosacral abnormalities seen in Bertolotti’s Syndrome can predispose patients to arthritic and radicular pain.