Ultrasound Visualization of the Triple Layer Sign of Lipohemarthrosis: Fat, Plasma, and Blood 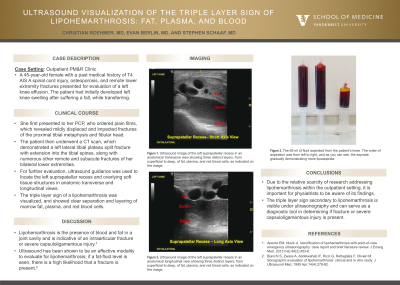 Case Diagnosis: Lipohemarthrosis in the setting of underlying intraartricular fracture

Case Description: A 45-year-old female with a past medical history of T4 AIS A paraplegia, osteoporosis, and remote lower extremity fractures presented for evaluation of a left knee effusion. The patient had initially developed left knee swelling after suffering a fall, while transferring. She first presented to her PCP, who ordered plain films, which revealed mildly displaced and impacted fractures of the proximal tibial metaphysis and fibular head. She then underwent a CT scan, which demonstrated a left lateral tibial plateau split fracture with extension into the tibial spines, along with numerous other remote and subacute fractures of her bilateral lower extremities. For further evaluation, ultrasound guidance was used to locate the left suprapatellar recess and overlying soft tissue structures in anatomic transverse and longitudinal views. The triple layer sign of a lipohemarthrosis was visualized, and showed clear separation and layering of marrow fat, plasma, and red blood cells.

Discussions: Lipohemarthrosis is the presence of blood and fat in a joint cavity and is indicative of an intraarticular fracture or severe capsuloligamentous injury. Ultrasound has been shown to be an effective modality to evaluate for lipohemarthrosis; if a fat-fluid level is seen, there is a high likelihood that a fracture is present. Of note, treatment for long bone fractures in patients with complete spinal cord injuries is typically more conservative.

Conclusions: Due to the relative scarcity of research addressing lipohemarthrosis within the outpatient setting, it is important for physiatrists to be aware of its findings. The triple layer sign secondary to lipohemarthrosis is visible under ultrasonography and can serve as a diagnostic tool in determining if fracture or severe capsuloligamentous injury is present.