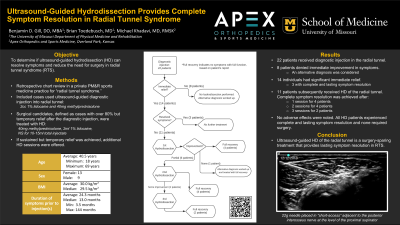 Objectives: The purpose of this study is to determine if ultrasound-guided hydrodissection (HD) can provide complete resolution and reduce the need for surgery in the treatment of radial tunnel syndrome (RTS).

Design: A retrospective review was performed in a physiatric sports medicine practice. Charts were searched for a diagnosis of RTS between January 2014 and December 2018, and those cases that were worked up by an ultrasound-guided diagnostic injection were included in analysis. Surgical candidates, defined as cases with over 80% but temporary relief after the diagnostic injection, were treated with ultrasound-guided hydrodissection (HD). HD was performed with a 22-guage needle placed in “short-access” under US-guidance, adjacent to the posterior interosseus nerve at the level of the proximal supinator. At least 10mL of total volume injected, including 40mg methylprednisolone, 1% lidocaine, and normal saline.  If sustained but temporary relief was achieved, a second HD was offered, and similarly after the second HD, a third HD was offered. Surveys, expressed as a percentage of patient-reported improvement, were administered immediately and over one year after procedure.

Results: Twenty-two patients, with symptoms averaging 24.3 months duration who failed conservative care, received diagnostic injection into the radial tunnel. Eight patients denied immediate improvement in symptoms, and an alternative diagnosis was considered. Of the fourteen individuals who experienced significant immediate relief, three experienced complete and lasting symptom resolution. The eleven remaining patients subsequently received HD of the radial tunnel. Complete symptom resolution was achieved after one HD by four patients; after two HDs by another four patients; and after three HDs by two patients. No adverse effects were noted. Further, all HD patients experienced complete and lasting symptom resolution and none required surgery.

Conclusions: Ultrasound-guided HD of the radial tunnel is a surgery-sparing treatment that provides lasting symptom resolution in RTS.