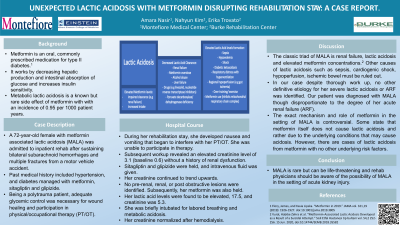 Case Description:
Patient was admitted to inpatient rehab after sustaining bilateral subarachnoid hemorrhages and multiple fractures from a motor vehicle accident. Past medical history included hypertension, and diabetes managed with metformin, sitagliptin and glipizide. Being a polytrauma patient, adequate glycemic control was necessary for wound healing and participation in physical/occupational therapy (PT/OT). During her rehabilitation stay, she developed nausea and vomiting that began to interfere with her PT/OT. Subsequent workup revealed an elevated creatinine level of 3.1 (baseline 0.6) without a history of renal dysfunction. Sitagliptin and glipizide were held, and intravenous fluid was given. She was unable to participate in therapy. Her creatinine continued to trend upwards. No pre-renal, renal, or post obstructive lesions were identified. Subsequently, her metformin was also held. Her lactic acid levels were found to be elevated, 17.5, and creatinine was 5.3. She was briefly intubated for labored breathing and metabolic acidosis. Her creatinine normalized after hemodialysis.


Discussions:
Metformin is an oral, commonly prescribed medication for type II diabetes. It works by decreasing hepatic production and intestinal absorption of glucose and increases insulin sensitivity. Metabolic lactic acidosis is a known but rare side effect of metformin, with an incidence of 0.95 per 1000 patient years. In our case despite thorough work up, no other definitive etiology for her severe lactic acidosis or ARF was identified. Our patient was diagnosed with MALA though disproportionate to the degree of her acute renal failure (ARF). MALA can be fatal in 50% of the cases and warrants aggressive treatment with supportive care, elimination of renally cleared medications and, if needed, hemodialysis.


Conclusions:
MALA is rare but can be life-threatening and rehab physicians should be aware of the possibility of MALA in the setting of acute kidney injury.