Viscosupplementation for knee osteoarthritis after radiofrequency ablation of the genicular nerve: a case report 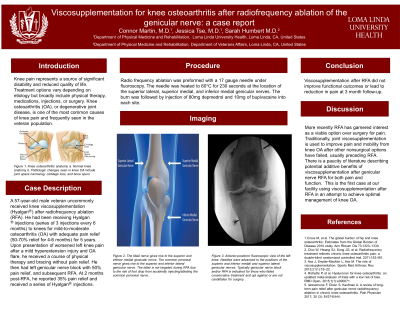 Case Diagnosis: Osteoarthritis of the knee

Case Description: A 57-year-old male veteran uncommonly received knee viscosupplementation (HyalganⓇ) after radiofrequency ablation (RFA). He had been receiving HyalganⓇ injections (series of 3 injections every 6 months) to knees for mild-to-moderate osteoarthritis (OA) with adequate pain relief (50-70% relief for 4-6 months) for 5 years. Upon presentation of worsened left knee pain after a mild hyperextension injury and OA flare, he received a course of physical therapy and bracing without pain relief. He then had left genicular nerve block with 50% pain relief, and subsequent RFA (17ga RFA at 60 degree℃ for 230 seconds of the superior lateral, superior medial, and inferior medial genicular nerves followed by injection of 80mg depomedrol with 10mg of bupivacaine into each site.) At 2 months post-RFA, he reported 35% pain relief and received a series of HyalganⓇ injections. He reported no further pain relief or functional improvement at follow-up 3-months after.

Discussions: Knee pain represents a source of significant disability and reduced quality of life. Treatment options vary depending on etiology but broadly include physical therapy, medications, injections, or surgery. More recently RFA has garnered interest as a viable option over surgery for pain. Traditionally, joint viscosupplementation is used to improve pain and mobility from knee OA after other nonsurgical options have failed, usually preceding RFA. There is a paucity of literature describing potential additive benefits of viscosupplementation after genicular nerve RFA for both pain and function.  This is the first case at our facility using viscosupplementation after RFA in an attempt to achieve optimal management of knee OA.

Conclusions: Based on this case, viscosupplementation of the knees after genicular nerve RFA does not seem to provide further pain relief or improved function for patients with knee OA, but further clinical observation and research is needed.