Pediatric Rehabilitation of Influenza B Associated Rhabdomyolysis: A Case Report 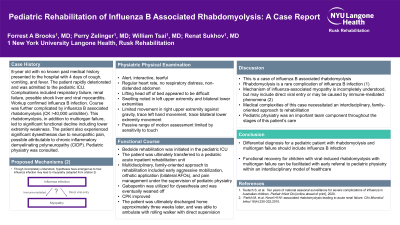 Discussions: This is a case of influenza B associated rhabdomyolysis, which is a rare complication of this infection. The complex medical care required for this child necessitated an interdisciplinary approach to rehabilitation including pediatric physiatry involvement throughout the stages of care.

Conclusions: Functional recovery for children with viral-induced rhabdomyolysis with multiorgan failure can be facilitated with early referral to pediatric physiatry within the framework of an interdisciplinary model of healthcare.