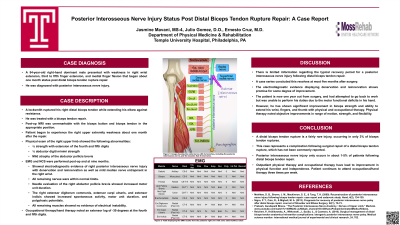 Discussions: There is limited information regarding the typical recovery period for a posterior interosseous nerve injury following distal biceps tendon repair. A case series concluded this resolves at most 5 months after surgery.  The patient is now one year out from surgery, and had attempted to go back to work but was unable to perform his duties due to the motor functional deficits in his hand. However, he has shown significant improvement in biceps strength and ability to extend his wrist, fingers, and thumb with physical and occupational therapy. Physical therapy noted objective improvements in range of motion, strength, and flexibility.