Post-Radiation Vasculopathy Presenting as a Stroke in a Pediatric Patient 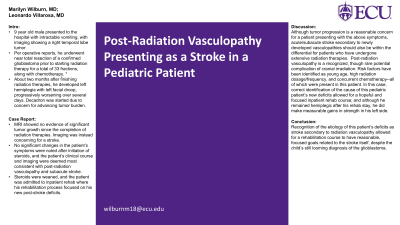 Case Description: A 9 year old male presented to the hospital with intractable vomiting, with imaging showing a right temporal lobe tumor. Per operative reports, he underwent near total resection of a confirmed glioblastoma prior to starting radiation therapy for a total of 33 fractions, along with chemotherapy. About two months after finishing radiation therapies, he developed left hemiplegia with left facial droop, progressively worsening over several days. Decadron was started due to concern for advancing tumor burden.
MRI, however, showed no evidence of significant tumor growth since the completion of radiation therapies. Imaging was instead concerning for a stroke. No significant changes in the patient’s symptoms were noted after initiation of steroids, and the patient’s clinical course and imaging were deemed most consistent with post-radiation vasculopathy and subacute stroke. Steroids were weaned, and the patient was admitted to inpatient rehab where his rehabilitation process focused on his new post-stroke deficits.

Discussions: Although tumor progression is a reasonable concern for patients presenting with the above symptoms, stroke secondary to newly developed vasculopathies should also be within the differential for patients who have undergone extensive radiation therapies.  Post-radiation vasculopathy is a recognized, though rare potential complication of cranial irradiation. Risk factors include young age, high radiation dosage/frequency, and concurrent chemotherapy--all of which were present in this patient. In this case, correct identification of the cause of this pediatric patient’s new deficits allowed for a hopeful and focused inpatient rehab course; and although he remained hemiplegic after his rehab stay, he still made measurable gains in strength.

Conclusions: Recognition of the etiology of this patient’s deficits as stroke secondary to radiation vasculopathy allowed for his rehabilitation course to have reasonable, focused goals related to the stroke itself, despite the child’s underlying diagnosis of glioblastoma.