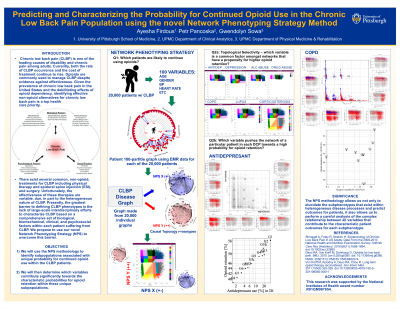 Objectives: Despite evidence against effectiveness in CLBP, opioids are often prescribed. Other therapies produce variable efficacy due to the heterogeneity of CLBP.  The greatest barrier to defining CLBP heterogeneity is the lack of interdisciplinary characterization. We use NPS to identify unique CLBP subpopulations with characteristic probabilities for continued opioid use. We then identify factors that contribute to those characteristic probabilities.

Design: We used a UPMC database with 20,000 CLBP patients on opioids at the initial visit to predict which patients would continue or discontinue using opioids at followup. NPS has the unique advantage of maintaining relationships between the 100 clinical variables collected during the initial visit.

Topological selectivity indicates a common underlying causal process. This was validated by showing that probabilities of these markers are predicted by NPS analysis of (100-1) clinical variables. Findings: 1. Groups with higher mean percentages of antidepressant use were associated with higher percentages of continued opioid use. 2. Patients with COPD associated networks have a high propensity for continued opioid use. 3. In some groups, opioid retention was strong for patients using antiplatelet medication while other groups with lower content of antiplatelet users showed high levels of continued opioid use.

Conclusions: NPS elucidates both expected associations with antidepressant use and more complex relationships between COPD diagnosis and antiplatelet use with the probability for continued opioid use. In this way, it identifies previously unrecognized variables associated with patient outcomes that can be used for future hypothesis testing.