A Rare Instance of Cerebellar Dysfunction In Chronic Lyme Disease 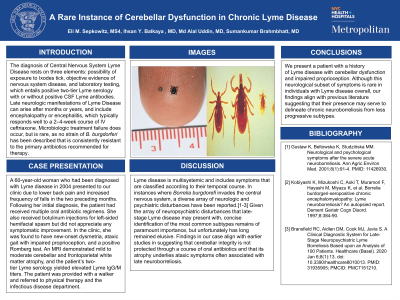 Case Description: A 60-year-old woman who had been diagnosed and treated with Lyme disease in 2004 presented to our clinic due to lower back pain and increased frequency of falls in the two preceding months. The patient’s history was significant with multiple oral antibiotic treatments for Lyme disease and multiple botox injections for left-sided hemifacial spasm without any improvement. In the clinic, she was found to have new-onset dysmetria, ataxic gait with impaired proprioception, and a positive Romberg test. An MRI demonstrated mild/moderate cerebellar and frontoparietal white matter atrophy, and the patient’s two-tier Lyme serology yielded elevated Lyme IgG/M titers. The patient was provided with a walker and referred to physical therapy and the infectious disease department.

Discussions: Lyme disease is multisystemic and includes symptoms that are classified according to their temporal course. In instances where Borrelia burgdorefi invades the central nervous system, a diverse array of neurologic and psychiatric disturbances have been reported.[1-3]  Given the array of neuropsychiatric disturbances that late-stage Lyme disease may present with, concise identification of the most common subtypes remains of paramount importance, but unfortunately has long remained elusive. Findings in our case align with earlier studies in suggesting that cerebellar integrity is not protected through a course of oral antibiotics and that its atrophy underlies ataxic symptoms often associated with late neuroborreliosis.

Conclusions: We present a patient with a history of Lyme disease with cerebellar dysfunction and impaired proprioception. Although this neurological subset of symptoms is rare in individuals with Lyme disease overall, our findings align with previous literature suggesting that their presence may serve to delineate chronic neuroborreliosis from less progressive subtypes.