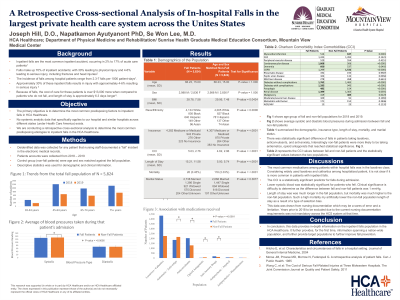 Objectives: Patient falls during hospitalization continues to be a concern for all members of the healthcare team. In the United States, there are hundreds of thousands of patients falls in hospitals which leads to an increase length of stay, increase cost of visit, and occurrence of new injury in patients when compared to patients who do not fall.

Design: This is a retrospective cross-sectional analysis evaluating falls in a nationwide private hospital system. Deidentified data was collected from 184 HCA hospitals between 2016-2019. Patients were selected if they had an ICD10 code of a fall at the time of discharge without admitting ICD 10 codes. Descriptive statistics was used for demographic and clinical information.

Results: Gross annual falls hospital wide demonstrated a downward trend 406 falls to 176 falls in 2016 and 2019 respectively. Mean age of patients was gradually increased over the year (60±18, 62± 8, 64±17, 62 ±19, P= 0.032).  Laxative and cathartics were the most common medications, and knee joint replacement was the most common procedure among fall patients.

Conclusions: There was a decrease incidence of inpatient falls annually in the HCA system during the time span of data collection. Average age of patients who fell during their hospital admission increased. In our review, laxatives and patients who underwent knee arthroplasty had the greatest incident of falls during their hospital admission. This data further provides, for the first time, information spanning a nationwide population, and further provides target populations to improve fall prevention.