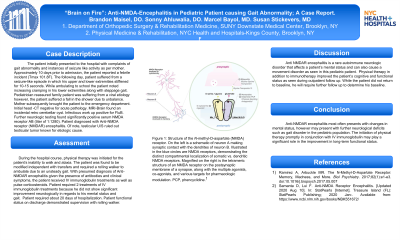 Case Description: The patient initially presented to the hospital with complaints of gait abnormality and instances of seizure like activity per mother. Approximately 10 days prior to admission, mother reported a febrile incident (Tmax 101.8F). The following day, patient suffered from a seizure-like episode in which his upper and lower extremities stiffened for 10-15 seconds without postictal state. While ambulating to school the patient noted increasing cramping in his lower extremities along with steppage gait. Subsequently, patient suffered a mechanical fall in the restroom due to unbalance leading to emergent medical attention. Initial head -CT negative for acute pathology. MRI-Brain found an incidental retro-cerebellar cyst. Infectious work up positive for FluB. Further neurologic testing found significantly positive serum NMDA receptor AB (titer of 1:1280). Patient diagnosed with Anti-NMDA receptor (NMDAR) encephalitis. Of note, testicular ultrasound ruled out testicular tumor known for etiologic cause.

Discussions: During the hospital course, physical therapy was initiated for the patient’s inability to ambulate independently. The patient was found to be modified independent with transfers and required a rolling walker to ambulate due to persistent unsteady gait. As such, Anti-NMDAR encephalitis is a rare autoimmune neurologic disorder that affects a patient’s mental status and may cause a movement disorder as seen in this pediatric patient.  Physical therapy in addition to immunotherapy improved the patient’s cognitive and functional status as noted during outpatient follow up. A team approach to the patient’s care allowed our patient to return to a significantly improved functional status.

Conclusions: Anti-NMDAR encephalitis most often presents with changes in mental status, however, may present with further neurological deficits such as gait disorder in the pediatric population. The initiation of physical therapy promptly in conjunction with IV immunoglobulin may play a significant role in the improvement in long-term functional status.