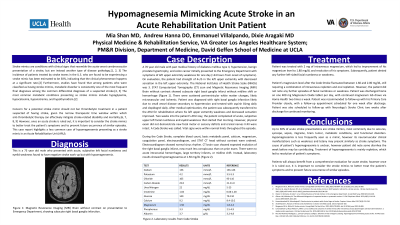 Case Diagnosis: This is a 73 year old male who presented to the with acute, subjective left facial numbness and eyelid weakness found to have negative stroke work-up but with hypomagnesemia.

Case Description: Patient was initially admitted with left upper extremity weakness, diagnosed with right basal ganglia infarction on imaging likely due to small vessel disease secondary to hypertension. Patient was treated with aspirin and clopidogrel and transferred to the acute rehabilitation unit (ARU) after stabilization. While at the ARU, patient then suddenly presented with acute, subjective left facial numbness and eyelid weakness. A code stroke was called. However, physical exam showed no new focal motor or sensory deficits as well as intact cranial nerves II-XII. STAT brain imaging also did not show any new acute intracranial hemorrhage or large territory infarct. Laboratory results instead showed hypomagnesemia at 1.50 mg/dL. Patient was treated with intravenous magnesium with improvement to 1.80 mg/dL and patient’s symptoms then fully resolved. Since then, patient denied any further left-sided facial numbness or weakness.

Discussions: Up to 30% of acute stroke presentations are stroke mimics, most commonly due to seizures, syncope, sepsis, migraine, brain tumor, metabolic conditions, and functional disorders. Hypomagnesemia is less frequently seen as a mimic, however its neuromuscular clinical manifestations such as weakness and tetany may present similarly as stroke symptoms. The cause of patient’s hypomagnesemia is unclear, however patient did note some diarrhea the week before. Treatment of hypomagnesemia is mainly repletion, which led to resolution of patient’s symptoms.

Conclusions: Patients will always benefit from a comprehensive evaluation for acute stroke, however once it is ruled out, it is important to consider the stroke mimics to better treat the patient’s symptoms and to prevent future occurrence of similar episodes.