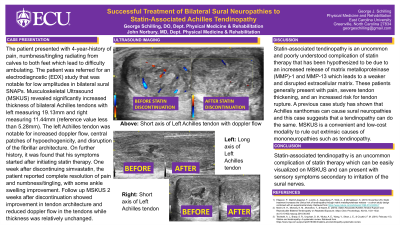 Case Description: The patient presented with 4-year-history of pain, numbness/tingling radiating from calves to both feet which lead to difficulty ambulating. The patient was referred for an electrodiagnostic (EDX) study that was notable for low amplitudes in bilateral sural SNAPs. Musculoskeletal Ultrasound (MSKUS) revealed significantly increased thickness of bilateral Achilles tendons with left measuring 19.13mm and right measuring 11.44mm (reference value less than 5.28mm). The left Achilles tendon was notable for increased doppler flow, central patches of hypoechogenicity, and disruption of the fibrillar architecture. On further history, it was found that his symptoms started after initiating statin therapy. One week after discontinuing simvastatin, the patient reported complete resolution of pain and numbness/tingling, with some ankle swelling improvement. Follow up MSKUS 2 weeks after discontinuation showed improvement in tendon architecture and reduced doppler flow in the tendons while thickness was relatively unchanged.

Discussions: Statin-associated tendinopathy is an uncommon and poorly understood complication of statin therapy that has been hypothesized to be due to an increased release of matrix metalloproteinase (MMP)-1 and MMP-13 which leads to a weaker and disrupted extracellular matrix. These patients generally present with pain, severe tendon thickening, and an increased risk for tendon rupture. A previous case study has shown that Achilles xanthomas can cause sural neuropathies and this case suggests that a tendinopathy can do the same. MSKUS is a convenient and low-cost modality to rule out extrinsic causes of mononeuropathies such as tendinopathy.

Conclusions: Statin-associated tendinopathy is an uncommon complication of statin therapy which can be easily visualized on MSKUS and can present with sensory symptoms secondary to irritation of the sural nerves.