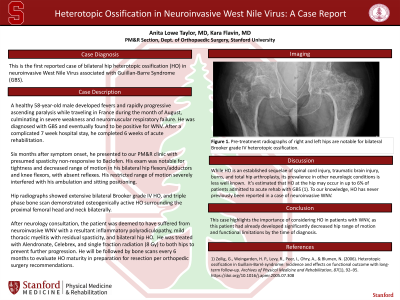 Case Description: A healthy 58-year-old male developed fevers and rapidly progressive ascending paralysis while traveling in France in August. He was diagnosed with GBS and eventually found to be positive for WNV. After a complicated 7 week hospital stay, he completed 6 weeks of acute rehabilitation.

After neurology consultation, the patient was deemed to have suffered from neuroinvasive WNV with a resultant inflammatory polyradiculopathy, mild thoracic myelitis with residual spasticity, and bilateral hip HO.

Discussions: While HO is an established sequelae of spinal cord injury, traumatic brain injury, burns, and total hip arthroplasty, its prevalence in other neurologic conditions is less well known.  It’s estimated that HO at the hip may occur in up to 6% of patients admitted to acute rehab with GBS. To our knowledge, HO has never previously been reported in a case of neuroinvasive WNV.

Conclusions: This case highlights the importance of considering HO in patients with WNV, as this patient had already developed significantly decreased hip range of motion and functional limitations by the time of diagnosis.