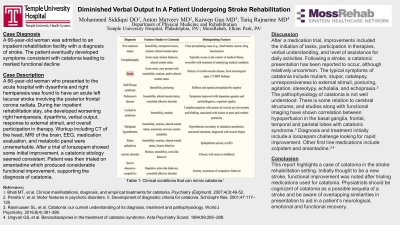 Case Diagnosis: A 66-year-old woman was admitted to an inpatient rehabilitation facility with a diagnosis of stroke. The patient eventually developed symptoms consistent with catatonia leading to marked functional decline.

Case Description: A 66-year-old woman who presented to the acute hospital with dysarthria and right hemiparesis was found to have an acute left lacunar stroke involving the posterior frontal corona radiata. During her inpatient rehabilitation stay, she developed worsening right hemiparesis, dysarthria, verbal output, response to external stimuli, and overall participation in therapy. Workup including CT of the head, MRI of the brain, EEG, medication evaluation, and metabolic panel were unremarkable. After a trial of lorazepam showed some initial improvement, a catatonic etiology seemed consistent. Patient was then trialed on amantadine which produced considerable functional improvement, supporting the diagnosis of catatonia.

Discussions: After a medication trial, improvements were noted in task initiation, participation in therapies, verbal understanding, and level of assistance for daily activities. Following a stroke, a catatonic presentation has been reported to occur, although relatively uncommon. The typical symptoms of catatonia include mutism, stupor, catalepsy, unresponsiveness to external stimuli, posturing, agitation, stereotypy, echolalia, and echopraxia. The pathophysiology of catatonia is not well understood. There is some relation to cerebral structures, and studies along with functional imaging have shown correlation between hypoperfusion in the basal ganglia, frontal, temporal and parietal lobes with catatonic syndrome. Diagnosis and treatment initially includes a lorazepam challenge looking for rapid improvement. Other first line medications include zolpidem and amantadine.

Conclusions: This report highlights a case of catatonia in the stroke rehabilitation setting. Initially thought to be a new stroke, functional improvement was noted after trialing medications used for catatonia.  Physiatrists should be cognizant of catatonia as a possible sequela of a stroke and be aware of overlapping similarities in presentation to aid in a patient’s neurological, emotional and functional recovery.