Shouldering the Pain: The Relationship of Demographic and Socioeconomic Factors to Incident Shoulder Pain 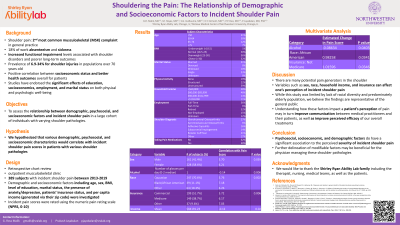 Objectives: Socioeconomic and demographic factors are known to be associated with health outcomes for a multitude of disorders. Although shoulder pain is the second most common musculoskeletal complaint in general practitioner clinics, the relationship of these factors to incident shoulder pain has not been fully delineated. The objective of the present study was to assess the relationship between demographic, psychosocial, and socioeconomic factors and incident shoulder pain in a large cohort of individuals with varying shoulder pathologies.

Results: Patients had a mean age of 61.43(+/-14.65) years, were 58.6% female, and with a BMI of 28.34 (+/-6.48). 51.3% of this cohort were married, 70.6% were Caucasian, and 51.7% had commercial insurance. Univariate analysis demonstrated that being male (p=0.039), Caucasian (p=0.002), with higher median household income (p=0.02), and having commercial insurance (0.006) were associated with significantly less shoulder pain. Multivariate analysis confirmed that being African American (p=0.034) or on Medicaid or Worker’s Compensation insurance (p=0.036) was also associated with increased shoulder pain. There were no significant differences in incident pain across differing shoulder pathologies.

Conclusions: Psychosocial, socioeconomic, and demographic factors do have a significant association to the severity of shoulder pain that patients present with. Further delineation of modifiable factors may be beneficial for the physician managing these shoulder pathologies. Additionally, understanding how these factors may impact patient expectations may in turn improve efficacy of our treatments.