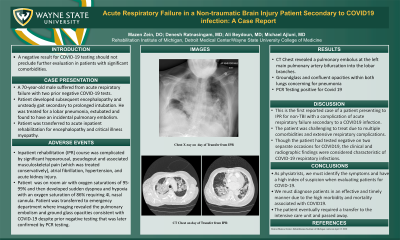 Case Description: A 70-year-old male with a past medical history of metabolic syndrome presented to inpatient rehabilitation (IPR) for encephalopathy and gait impairment. The patient originally presented to the acute care hospital with severe respiratory symptoms requiring intubation. Imaging revealed a right upper lobe pneumonia. Influenza and COVID19 testing were negative and the patient was treated with broad spectrum antibiotics. Acute care course was complicated by pulmonary embolus. On Day 27, COVID19 testing was negative for a second time on day of transfer to IPR. On Day 33, patient developed acute hypoxic respiratory failure during a therapy session requiring oxygen supplementation. CT chest demonstrated ground glass opacities within both lungs. COVID19 testing was repeated and positive on Day 54.

Discussions: This is the first reported case of a patient presenting to IPR with a complication of acute respiratory failure secondary to COVID19 with multiple prior negative tests. Our patient was challenging to treat due to multiple co-morbidities and extensive respiratory complications. Since the patient tested negative on two separate occasions for COVID19, there was hesitation to re-test. The clinical and radiographic findings were considered characteristic of COVID19 infections. The patient lived in a city that was experiencing one of the highest rises of COVID19 cases in the nation at that time.

Conclusions: It is necessary to consider COVID19 infections in high risk patients. Even though this patient originally tested negative for COVID19 on two separate occasions, there were multiple reports of ineffective testing/sensitivity for COVID19. As physiatrists, we must identify the symptoms and have a high index of suspicion when evaluating patients for COVID19. We must diagnose and isolate patients in an effective and timely manner due to the high morbidity and mortality associated with COVID19. Our patient eventually required an acute care transfer and passed away from complications of COVID19.