Sometimes Even a Well-Diagnosed Functional Movement Disorder is Not Functional 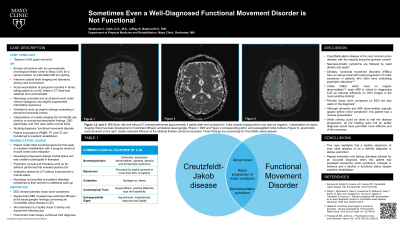 Case Description: A 65-year-old woman with an unremarkable neurological history presented with complaints of intermittent left arm jerking. Prior to admission, intensive outside imaging and laboratory workup was inconclusive. After review, our neurologist felt her clinical course/presentation was consistent with functional movement disorder. She was admitted to inpatient rehabilitation and initially made gains with a program aimed at muscle control and relaxation. Unfortunately, she developed progressive encephalopathy and declining functional status. Psychiatry and repeat neurology consults initially considered hyperactive delirium. Her condition worsened and, ultimately an EEG showed periodic sharp wave complexes and repeat brain MRI revealed new restricted diffusion at the basal ganglia- findings concerning for Creutzfeldt-Jakob disease (CJD). She dismissed to a facility closer to family and expired the following day.

Discussions: Creutzfeldt-Jakob disease is the most common prion disease, with the majority being the sporadic variant. Neuropsychiatric symptoms are followed by rapid decline and death. Similarly, functional movement disorders (FMDs) have an abrupt onset with rapid progression of motor symptoms in patients who often have underlying psychiatric disorders. Unlike FMDs which have no organic abnormalities, brain MRI is critical to diagnosing CJD as reduced diffusivity on DWI images is the most sensitive finding. Periodic sharp wave complexes on EEG are also useful in the diagnosis. Although dementia and MRI abnormalities typically appear before motor symptoms, this patient had a reverse presentation. While nothing could be done to halt her disease progression, all her treating team felt an earlier diagnosis would have permitted more effective end of life measures.

Conclusions: This case highlights that a healthy skepticism of even what appears to be a definite diagnosis is always warranted. Repeat evaluation and testing ultimately allowed for an accurate diagnosis when this patient had persistent worsening motor symptoms, changes in behavior and a decline in functional status despite inpatient rehabilitation.