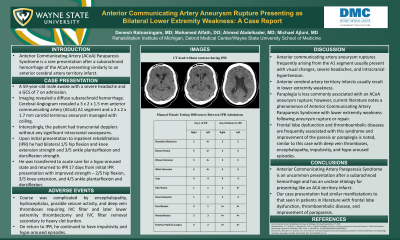 Conclusions: Anterior Communicating Artery Paraparesis Syndrome is an uncommon presentation after a subarachnoid hemorrhage and has an unclear etiology for presenting like an ACA territory infarct. Our case presentation had similar manifestations to that seen in patients in literature with frontal lobe dysfunction, thromboembolic disease, and improvement of paraparesis.