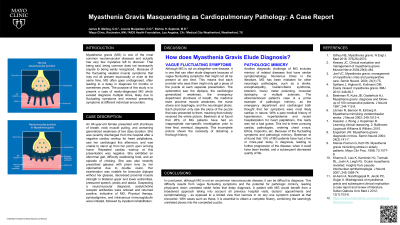 Case Description: An 84-year-old female presented with shortness of breath, neck muscle pulling, and worsening generalized weakness of two days duration. She was recently discharged from the hospital after a negative cardiac workup for heart palpitations, saw her cardiologist this afternoon, and was unable to stand up from her porch upon arriving home. Repeated cardiac workup at this presentation was negative. She exhibited an abnormal gait, difficulty swallowing food, and an episode of choking. She was also recently prescribed glasses with prism lens by her optometrist due to double vision. Her examination was notable for binocular diplopia without her glasses, decreased proximal muscle strength in bilateral upper and lower extremities, pressured speech, ptosis, and ataxia. Suspecting a neuromuscular diagnosis, acetylcholine receptor antibodies were ordered and returned positive, indicative of MG. Physical therapy, pyridostigmine, and intravenous immunoglobulin were initiated, followed by inpatient rehabilitation.

Discussions: Like many neuromuscular pathologies, MG presents with a wide variety of symptoms. Less commonly, the muscles of respiration are involved, leading to shortness of breath, accessory muscle usage, and potential respiratory distress from myasthenia crisis. 26% of MG patients have had an inappropriate non-specific investigation prior to their final, eventual, diagnosis. The aforementioned patient’s case is a prime example of pathologic mimicry, as the emergency department and cardiologist both thought that her symptoms were most likely cardiac in nature. Because of the fluctuating symptoms and pathologic mimicry, 13% of MG patients have had a five or more-year delay in diagnosis, leading to further progression of the disease, when it could have been treated, and a subsequent decreased quality of life.


Conclusions: Although MG is a common neuromuscular disease, its diagnosis can be difficult, due to vague fluctuating symptoms and potential for pathologic mimicry that lead physicians down unrelated rabbit holes that delay diagnosis.