Intrathecal baclofen as a potential cause of neuropsychiatric disturbances in a patient with spasticity from cerebral origin. 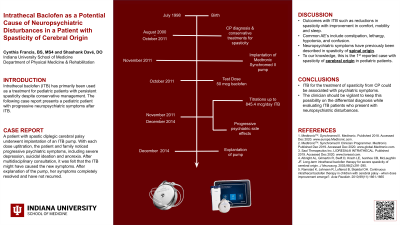 Case Diagnosis: Intrathecal baclofen as a potential cause of neuropsychiatric disturbances in a pediatric patient with spasticity.

Case Description: The patient was diagnosed with cerebral palsy at age two and developed significant spasticity, which did not respond to conventional treatments.  At age thirteen, she had a successful test done of intrathecal baclofen, and subsequently received an implant of a Medtronic ® Synchromed II pump. Over the next 3 years, she had multiple dose titrations up to 845.4 mcg/day. Simultaneously, and with each subsequent increase, the patient and family noticed progressive psychiatric symptoms including severe depression, intrusive suicidal thoughts, and anorexia. After conferring with pediatric physiatry, neurology, and neurosurgery, it was felt that the intrathecal delivery of baclofen (Lioresal) might have been the cause of the new symptoms.  Her pump setting was decreased. At age sixteen, she underwent explantation of the pump.  Since removal of the device, the atypical symptoms she experienced while using the pump completely resolved and have not recurred.

Discussions: Intrathecal baclofen has primarily been used as a treatment for pediatric patients that have persistent spasticity despite conservative management. Patients generally have reported improved outcomes such as reductions in spasticity with improvement in comfort, mobility, and sleep with this device. Commonly reported adverse effects of intrathecal baclofen pump usage include constipation, lethargy, hypotonia, and confusion.  The neuropsychiatric symptoms reported by our patient have been described rarely in spasticity of spinal origin, however these same symptoms, to our knowledge, have not been reported for pediatric patients with spasticity of cerebral origin.

Conclusions: Intrathecal baclofen for the treatment of spasticity from cerebral palsy could be associated with psychiatric symptoms, such as severe depression, suicidally intrusive thoughts and anorexia.  The clinician should be vigilant to keep this possibility on the differential diagnosis while evaluating patients who present with neuropsychiatric disturbances and a history an intrathecal baclofen pump.