Technological Reserve in Parkinson’s Disease: A Pilot Study of Smartphones as Cognitive Prosthetic 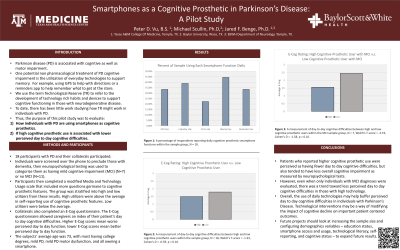 Objectives: Though classically characterized by motor symptoms, Parkinson’s disease (PD) is also associated with cognitive impairment. One potential nonpharmacological treatment of such impairments is the utilization of everyday technologies to support day-to-day cognitive functioning. We use the term Technological Reserve (TR) to reference the development of technology-enriched habits and environments to support cognitive functioning in those with neurodegenerative disease. To date, there has been little work studying how TR might function in individuals with PD.
Thus, in the current pilot study we: 1) describe how individuals with PD are using smartphones as cognitive-prosthetics, and 2) explore if high cognitive-prosthetic use is associated with lower perceived day-to-day cognitive difficulty.

Design: 18 participants with PD and their collaterals participated. All participants owned a smartphone. Neuropsychological testing was used to categorize participants as having a mild cognitive impairment (MCI) (N=7) or normal cognition (N=11). Participants completed a modified Media and Technology Usage scale with an emphasis on cognitive-prosthetic features of the device, such as to-do lists and reminders. Collateral reporters completed a questionnaire describing the participant’s day-to-day cognitive difficulties.

Conclusions: Overall, the results of this pilot study suggest that the use of smartphone technologies may help buffer perceived day-to-day cognitive difficulties in individuals with Parkinson’s Disease. Technological interventions may be a way of modifying the impact of cognitive decline on important patient-centered outcomes.