Transient Aphasia before and after left sided craniotomy for intraparenchymal bleed and tumor resection: A Case Report 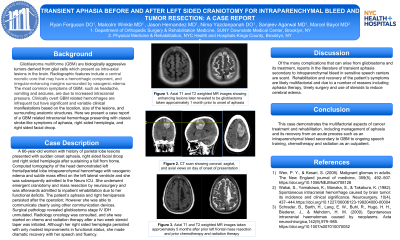 Case Description: A 66-year-old women with history of parietal lobe lesions presented with sudden onset aphasia, right sided facial droop and right sided hemiplegia after sustaining a fall from home. Computed tomography of the head demonstrated left frontal/parietal lobe intraparenchymal hemorrhage with vasogenic edema and subtle mass effect on the left lateral ventricle and she was subsequently admitted to the Neuro ICU. She underwent emergent craniotomy and mass resection by neurosurgery and was afterwards admitted to inpatient rehabilitation due to her functional deficits. The patient’s aphasia and right hemiparesis persisted after the operation; however she was able to communicate clearly using other communication devices. Surgical pathology revealed glioblastoma stage IV IDH unmutated. Radiology oncology was consulted, and she was started on chemo and radiation therapy after a two week steroid taper was initiated. When the steroid taper finished, she slowly began to recover her speech and fluency.

Discussions: Of the many complications that can arise from glioblastoma and its treatment, reports in the literature of transient aphasia secondary to intraparenchymal bleed in sensitive speech centers are scant.  Rehabilitation and recovery of the patient’s symptoms are likely multifactorial and due to a number of reasons including aphasia therapy, timely surgery and use of steroids to reduce cerebral edema.

Conclusions: This case demonstrates the multifactorial aspects of cancer treatment and rehabilitation, including management of aphasia and its recovery from an acute process such as an intraparenchymal bleed secondary to GBM to ongoing speech training, chemotherapy and radiation as an outpatient.