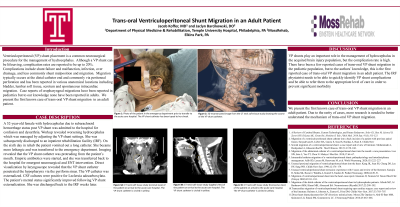 Case Description: A 52-year-old female with hydrocephalus due to subarachnoid hemorrhage status post ventriculoperitoneal (VP) shunt was admitted to the hospital for confusion and dysarthria. Workup revealed worsening hydrocephalus which was managed by adjusting the VP shunt settings. She was subsequently discharged to an inpatient rehabilitation facility (IRF). On the sixth day in rehab the patient vomited out a long catheter. She became more lethargic and was transferred to the emergency department. Imaging revealed that the VP shunt catheter was protruding from the patient’s mouth. Empiric antibiotics were started, and she was transferred back to the hospital for emergent neurosurgical and ENT intervention. Direct visualization by laryngoscope revealed that the VP shunt catheter penetrated the hypopharynx via the pyriform sinus. The VP catheter was externalized. CSF cultures were positive for Leclercia adecarboxylata. The patient’s mental status significantly improved following VP shunt externalization. She was discharged back to the IRF weeks later.