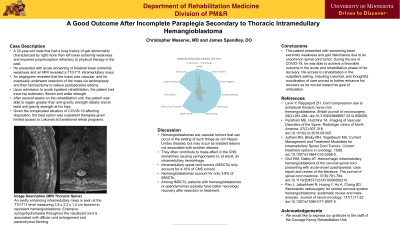 Case Description: A 33-year-old male that had a long history of gait abnormality characterized by right more than left lower extremity weakness and impaired proprioception refractory to physical therapy in the past. He presented with acute worsening of bilateral lower extremity weakness and an MRI revealed a T10-T11 intramedullary mass. An angiogram revealed that the mass was vascular, and he eventually underwent resection of the mass via laminoplasty and then laminectomy to relieve postoperative edema. Upon admission to acute inpatient rehabilitation, the patient had trace hip extension, flexion and ankle strength. After several weeks on the rehabilitation unit, the patient was able to regain greater than anti-gravity strength distally and at least anti-gravity strength at his hips. Given the complicated situation of COVID-19 affecting disposition, the best option was outpatient therapies given limited access to Lokomat at our transitional rehab programs.

Discussions: Hemangioblastomas are vascular tumors that can occur in the setting of such things as von Hippel-Lindau disease, but may occur as isolated lesions not associated with another disease. They often contribute to mass effect in the CNS sometimes causing syringomyelia or, at worst, an intramedullary hemorrhage. Intramedullary spinal cord tumors (IMSCTs) only account for 4-10% of CNS tumors. Hemangioblastomas account for only 3-8% of IMSCTs. Among IMSCTs, patients with hemangioblastomas or ependymomas typically have better neurologic recovery after resection or treatment.

Conclusions: This patient presented with worsening lower extremity weakness and gait disturbance due to an uncommon spinal cord tumor. During the era of COVID-19, he was able to achieve a favorable outcome in the acute and rehabilitative phase of his recovery. His access to rehabilitation in the outpatient setting, including Lokomat, and thoughtful coordination of care proved to further enhance his recovery as he moves toward his goal of ambulation.