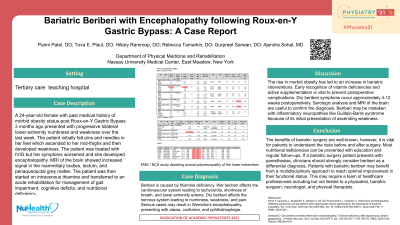 Case Description: A 24-year-old female with morbid obesity status-post Roux-en-Y Gastric Bypass 3 months ago presented with progressive bilateral lower extremity numbness and weakness over the last week. The patient initially felt pins and needles in her feet which ascended to her mid-thighs and then developed weakness. The patient was treated with IVIG but her symptoms worsened and she developed encephalopathy. MRI of the brain showed increased signal in the mammillary bodies, tectum, and periaqueductal grey matter. The patient was then started on intravenous thiamine and transferred to an acute rehabilitation for management of gait impairment, cognitive deficits, and nutritional deficiency.

Discussions: The rise in morbid obesity has led to an increase in bariatric interventions. Early recognition of vitamin deficiencies and active supplementation is vital to prevent postoperative complications. Dry beriberi symptoms occur approximately 4-12 weeks postoperatively. Serologic analysis and MRI of the brain are useful to confirm the diagnosis. Beriberi may be mistaken with inflammatory neuropathies like Guillain-Barré syndrome because of its initial presentation of ascending weakness.

Conclusions: The benefits of bariatric surgery are well-known, however, it is vital for patients to understand the risks before and after surgery. Most nutritional deficiencies can be prevented with education and regular follow-ups. If a bariatric surgery patient presents with paresthesias, clinicians should strongly consider beriberi as a differential diagnosis. Patients with bariatric beriberi may benefit from a multidisciplinary approach to reach optimal improvement in their functional status. This may require a team of healthcare professionals including but not limited to a physiatrist, bariatric surgeon, neurologist, and physical therapists.