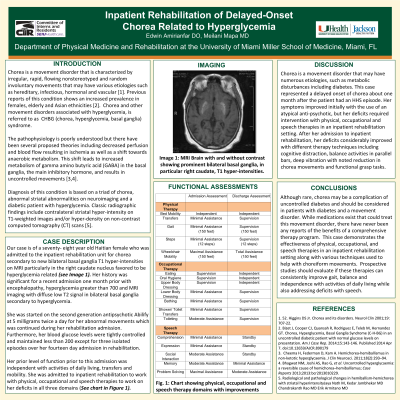 Case Description: We present the case of a 78-year-old Haitian female who had developed chorea one month after experiencing a hyperglycemic episode and Hyperglycemic Hyperosmolar State (HHS). This case report discusses her rehabilitation course to address her deficits and her progress in the acute rehabilitation unit while also being on an atypical anti-psychotic to control her movements. After a short rehabilitation course in inpatient rehabilitation , the patient progressed significantly from requiring moderate assistance in many of her tasks, to a supervision level. In addition, her facial movements improved considerably.

Discussions: Chorea is a movement disorder that may have numerous etiologies, including diabetes. This case represented a delayed onset of chorea about 1 month after the patient had an HHS episode. Her symptoms improved initially with the use of an atypical anti-psychotic, but her deficits required intervention with physical, occupational and speech therapies in an inpatient rehabilitation setting . After her admission to inpatient rehabilitation, her deficits considerably improved.

Conclusions: Although rare, chorea may be a complication of uncontrolled diabetes and should be considered in patients with diabetes. Patients who have a movement disorder, such as chorea, may benefit from acute inpatient rehabilitation to address their deficits.  Prospective studies should evaluate if these therapies can consistently improve patient’s gait, balance and gaining independence with activities of daily living while also addressing deficits with speech.