A Case of Carotid Web in a Young, Black Female, Highlighting the Importance of Overcoming Implicit Bias 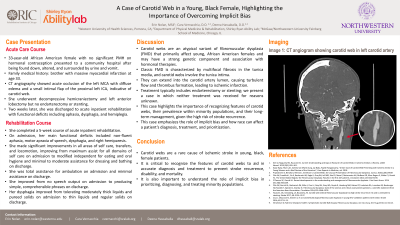 Case Description: A 33-year-old African American female on hormonal contraception presented to a community hospital after being found down, altered, and surrounded by urine and vomit. Her brother experienced massive myocardial infarction at age 33. CT angiography showed acute occlusion of the left MCA with diffuse edema and a small intimal flap of the proximal left ICA, indicative of carotid web. She underwent decompressive hemicraniectomy and left anterior lobectomy but no endarterectomy or stenting. Two weeks later, she was discharged to acute inpatient rehabilitation with functional deficits including aphasia, dysphagia, and hemiplegia. She made significant gains in four weeks, improving from maximum assistance for most activities of daily living to minimal assistance or complete independence.

Discussions:
Carotid webs are an atypical variant of fibromuscular dysplasia (FMD) that primarily affect young, African American females and may have a strong genetic component and association with hormonal therapies. While classic FMD is characterized by multifocal fibrosis in the tunica media, carotid webs involve the tunica intima. They can extend into the carotid artery lumen, causing turbulent flow and thrombus formation, leading to ischemic infarction. Treatment includes endarterectomy or stenting, neither of which this patient received, for reasons unknown. This case highlights the importance of recognizing features of carotid webs, their prevalence within minority populations, and their long-term management, given the high risk of stroke recurrence. Furthermore, this case emphasizes the role of implicit bias and how race can affect a patient’s diagnosis, treatment, and prioritization.


Conclusions: Carotid webs are a rare cause of ischemic stroke in young, black, female patients. It is critical to recognize the features of carotid webs to aid in accurate diagnosis and treatment to prevent stroke recurrence, disability, and mortality. Furthermore, it is important to understand the role of implicit bias in prioritizing, diagnosing, and treating minority populations.