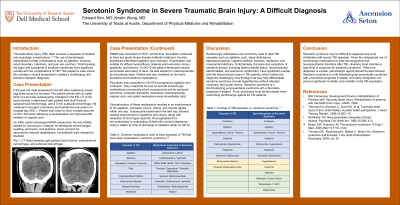 Case Description: A 20-year-old male suffered a severe TBI after sustaining a bean bag round to his head. The patient’s hospital course in intensive care was complicated by fevers, respiratory infection, emesis, ileus, and allergic reaction to vancomycin.  Physical exam was notable for agitation, confusion, clonus, hyperreflexia, and muscle rigidity. The patient was placed on several medications including linezolid, metoclopramide, valproic acid, trazodone, and opioids, which are known to cause serotonin syndrome especially when used concurrently. The diagnosis of serotonin syndrome was delayed due to the overlap of symptoms commonly seen with TBI. Discontinuation of these medications resulted in resolution of his agitation, confusion, fevers, clonus, and muscle rigidity.  He progressed from non-ambulatory to ambulating 40 feet with minimal assistance using a walker by time of discharge to inpatient rehab.

Conclusions: Serotonin syndrome may be difficult to diagnose due to its similarities with severe TBI sequelae. Given the widespread use of serotonergic medications to treat neurocognitive and neuropsychiatric disorders after TBI, clinicians must maintain a high level of suspicion for serotonin syndrome.  When the diagnosis is unclear, serotonergic agents should be discontinued.  Serotonin syndrome is a life-threatening yet preventable syndrome with a favorable prognosis if treated, and early recognition can prevent significant morbidity and mortality in the TBI population.