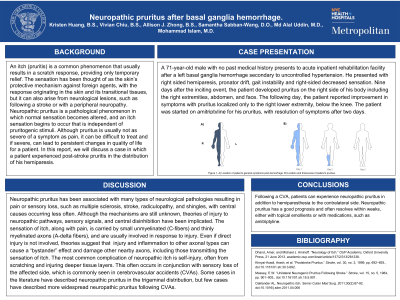 Case Description: A 71-year-old male with no past medical history presents to acute inpatient rehabilitation facility after a left basal ganglia hemorrhage secondary to uncontrolled hypertension. He presented with right sided hemiparesis, pronator drift, gait instability and right-sided decreased sensation. Nine days after the inciting event, the patient developed pruritus on the right side of his body including the right extremities, abdomen, and face. The following day, the patient reported improvement in symptoms with pruritus localized only to the right lower extremity, below the knee. The patient was started on amitriptyline for his pruritus, with resolution of symptoms after two days.

Discussions: Neuropathic pruritus is a pathological phenomenon in which normal sensation becomes altered, and an itch sensation begins occurs independent of pruritogenic stimuli. It arises from nerve damage at any point along the neural pathway. The mechanism is poorly understood however one hypothesis is that local nerve damage to C-fiber neurons could result in misfiring of itch-specific C-fibers. Another hypothesis includes loss of inhibitory neurons in the spinothalamic tract that result in unwanted activation of itch sensation. There are some cases of neuropathic pruritus in the trigeminal distribution, but few cases have described more widespread neuropathic pruritus following cerebrovascular accidents (CVA). There have been a handful of case reports of stroke patients presenting with contralateral pruritis. In one such case, neuropathic itching resolved after use of topical emollients. Another case of itching following stroke was successfully treated with amitriptyline.

Conclusions: Following a CVA, patients can experience neuropathic pruritus in addition to hemiparesthesia to the contralateral side. Neuropathic pruritus has a good prognosis and often resolves within weeks, either with topical emollients or with medications, such as amitriptyline.