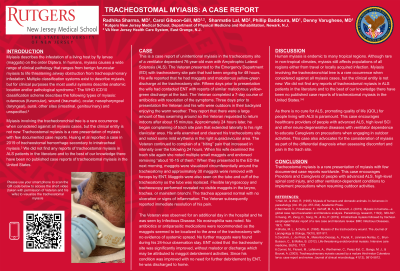 Case Description: We present a case of unintentional myiasis in the tracheostomy site of a ventilator-dependent 76-year-old male with amyotrophic lateral sclerosis (ALS) who presented to the emergency department because his wife noted maggots and malodorous stomal discharge the prior night when he complained of “biting” pain at his tracheostomy site. His complaints began 24 hours after their backyard outing was terminated “due to flies.” Two weeks earlier, he completed antibiotic treatment for stomal malodorous discharge. On exam, maggots were seen around the tracheostomy and approximately 30 maggots were removed with forceps resulting in immediate pain relief. Laryngoscopy and tracheoscopy revealed no maggots. The tracheostomy tube was replaced, and he was monitored for 24 hours for possible maggot hatching and systemic spread, and discharged home without need for treatment. The stoma site clinically improved which is attributable to maggot debridement activities.

Discussions: There have been no published case reports of tracheostomal myiasis in the United States. As there is no cure for ALS, promoting quality of life for these patients is paramount. It is also important to consider this differential diagnosis when assessing discomfort and pain in the tracheostomy site.