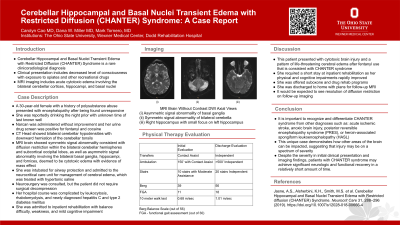 Case Diagnosis: Rare case of CHANTER syndrome after fentanyl and cocaine use

Case Description: A 30-year-old female with a history of polysubstance abuse presented with encephalopathy refractory to Narcan after being found unresponsive by family. MRI brain showed symmetric signal abnormality consistent with diffusion restriction within the bilateral cerebellar hemispheres and subcortical occipital lobes, as well as asymmetric signal abnormality involving the bilateral basal ganglia, hippocampi, and fornices, deemed to be cytotoxic edema with evidence of mass effect. She was intubated for airway protection and admitted to the neurocritical care unit for management of cerebral edema, which was treated with hypertonic saline. Her urine drug screen was positive for fentanyl and cocaine. She was then admitted to inpatient rehabilitation for significant physical and cognitive impairments which rapidly improved with treatment.

Discussions: This patient presented with cytotoxic brain injury and a pattern of cerebral edema that fits a rare clinicoradiological diagnosis named CHANTER syndrome, which can be associated with life-threatening cerebellar edema and bilateral hippocampal diffusion restriction after acute recreational drug exposures. This unique case also demonstrates other areas of the brain can be impacted, suggesting that injury may be on a spectrum of severity.

Conclusions: It is important to recognize and differentiate CHANTER syndrome from other diagnoses such as: acute ischemic stroke, anoxic brain injury, posterior reversible encephalopathy syndrome (PRES), or heroin-associated spongiform leukoencephalopathy (HASL), as clinical outcomes and treatment management differ. Despite the severity in initial clinical presentation and imaging findings, patients with CHANTER syndrome may achieve significant neurologic and functional recovery in a relatively short amount of time.