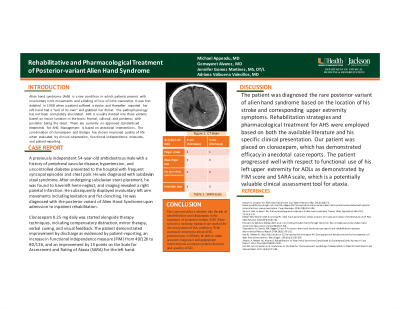 Case Description: A previously independent 54-year-old ambidextrous male with a history of peripheral vascular disease, hypertension, and uncontrolled diabetes presented to the hospital with frequent syncopal episodes and chest pain. He was diagnosed with subclavian steal syndrome. After undergoing subclavian stent placement, he was found to have left hemi-neglect, and imaging revealed a right parietal infarction. He subsequently displayed involuntary left arm movements including levitation and fist clenching. He was diagnosed with the posterior variant of Alien Hand Syndrome (AHS) upon admission to inpatient rehabilitation.
Clonazepam 0.25 mg daily was commenced alongside therapy techniques, including compensatory distraction, mirror therapy, verbal cueing, and visual feedback. The patient demonstrated improvement by discharge as evidenced by patient-reporting, an increase in functional independence measure (FIM) from 49/126 to 80/126, and an improvement by 15 points on the Scale for Assessment and Rating of Ataxia (SARA) for the left hand.

Discussions: The patient was diagnosed with the rare posterior variant of alien hand syndrome based on the location of his stroke and corresponding upper extremity symptoms. Rehabilitation strategies and pharmacological treatment for AHS were employed based on both the available literature and his specific clinical presentation. Our patient was placed on clonazepam, which has demonstrated efficacy in anecdotal case reports. The patient progressed well with respect to functional use of his left upper extremity for ADLs as demonstrated by FIM score and SARA scale, which is a potentially valuable clinical assessment tool for ataxia.

Conclusions: Our case provides a window into the role of a combination of rehabilitation and clonazepam in the treatment of posterior-variant AHS. More sensitive outcome measures are still needed for the assessment of this condition. With increased awareness about AHS, clinical practitioners will hopefully be able to make accurate diagnoses and appropriate interventions to improve patient function and quality of life.