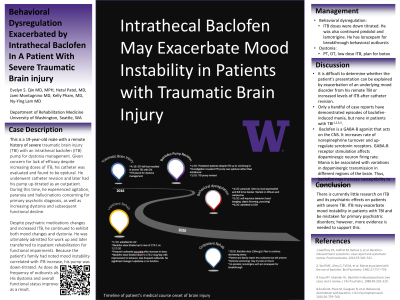 Case Diagnosis: Agitation and dystonia with ITB uptitration in the context of severe TBI


Case Description: This is a 19-year-old young man with a remote history of severe traumatic brain injury (TBI) with an intrathecal baclofen (ITB) pump for dystonia management. Given concern for lack of efficacy despite increasing doses of ITB, his catheter was evaluated and found to be epidural. He underwent catheter revision and later had his pump uptitrated as an outpatient. During this time, he experienced agitation, paranoia and hallucinations concerning for primary psychotic diagnosis, as well as increasing dystonia and subsequent functional decline. Despite psychiatric medication changes and increased ITB, he continued to exhibit both mood changes and dystonia. He was ultimately admitted for work up and later transferred to inpatient rehabilitation for functional impairments. Because the patient’s family had noted mood instability correlated with ITB increase, his pump was downtitrated. As dose decreased, the frequency of outbursts also decreased. His dystonia and overall functional status improved as a result.

Discussions: It is difficult to determine whether his presentation can be explained by exacerbation of an underlying mood disorder from his remote TBI or increased levels of ITB after catheter revision. Only a handful of case reports have demonstrated episodes of baclofen-induced mania, but none in patients with TBI. It is possible that the rapid increase in ITB with catheter revision resulted in an exacerbation of underlying behavioral dysregulation secondary to TBI. This may have then led to increasing dystonia despite escalating doses of ITB. This is further supported by improvement of both dystonia and agitation while weaning ITB.

Conclusions: There is currently little research on ITB and its psychiatric effects on patients with severe TBI. ITB may exacerbate mood instability in patients with TBI and be mistaken for primary psychiatric disorders; however, more evidence is needed to support this.