A Rare Etiology of Finger Weakness in a Recreational Weightlifter 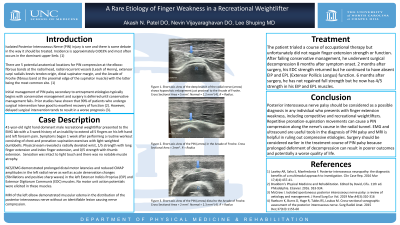 Discussions: Isolated spontaneous posterior interosseous nerve palsy is a rare condition and treatment is controversial. Incidence is approximately 0.003% and most often occurs in the dominant upper limb. The most common cause is entrapment at the arcade of Froshe. We present a case of an individual who sustained a PIN palsy in his non-dominant upper limb by performing routine exercises. He failed conservative management and underwent surgical decompression 8 months after symptom onset. 2 months after surgery, his EDC strength has returned but he continues to have absent EIP and EPL function.


Conclusions: Posterior interosseous nerve palsy should be considered as a possible diagnosis in any individual who presents with finger extension weakness, including recreational weightlifters. NCS/EMG and Ultrasound are useful tools in the diagnosis of PIN palsy and MRI is helpful in ruling out compressive etiologies. Surgery should be considered earlier in the treatment course of PIN palsy as prolonged deferment of decompression can result in poorer outcomes.