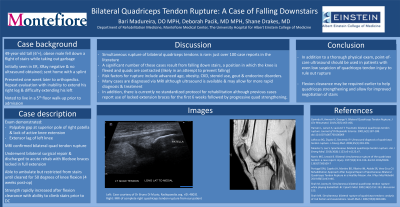 Case Description: 49-year-old tall, obese male fell down a flight of stairs while carrying garbage and was subsequently unable to stand without assistance. Patient seen initially in the ER and sent home with a splint. On repeat evaluation, orthopedics was consulted because he was unable to extend his right leg & had difficulty extending his left. Examination demonstrated palpable gap at the superior pole of the right patella and lack of active knee extension. Extensor lag noted in left knee. MRI confirmed bilateral quadriceps tendon rupture. He underwent bilateral surgical repair and was admitted to acute rehab with Bledsoe braces locked in full extension. He was able to ambulate but was restricted from climbing stairs until cleared for 50 degrees of knee flexion (4 weeks post-op). His leg strength rapidly increased after flexion clearance with ability to climb stairs prior to discharge.

Discussions: Simultaneous rupture of bilateral quadriceps tendons is rare with just over 100 case reports in the literature. A significant number of these cases result from falling down stairs, a position in which the knee is flexed and quads are contracted (likely in an attempt to prevent falling). Risk factors for rupture include advanced age, obesity, CKD, steroid use, gout & endocrine disorders. Many cases are diagnosed via MRI although ultrasound is available & may allow for more rapid diagnosis & treatment. In addition, there is currently no standardized protocol for rehabilitation although previous cases report use of locked extension braces for the first 6 weeks followed by progressive quad strengthening.

Conclusions: Ultrasound should be considered in patients with even low suspicion of quadriceps tendon injury to rule out rupture. Flexion clearance may be required earlier to help quadriceps strengthening and allow for improved negotiation of stairs.